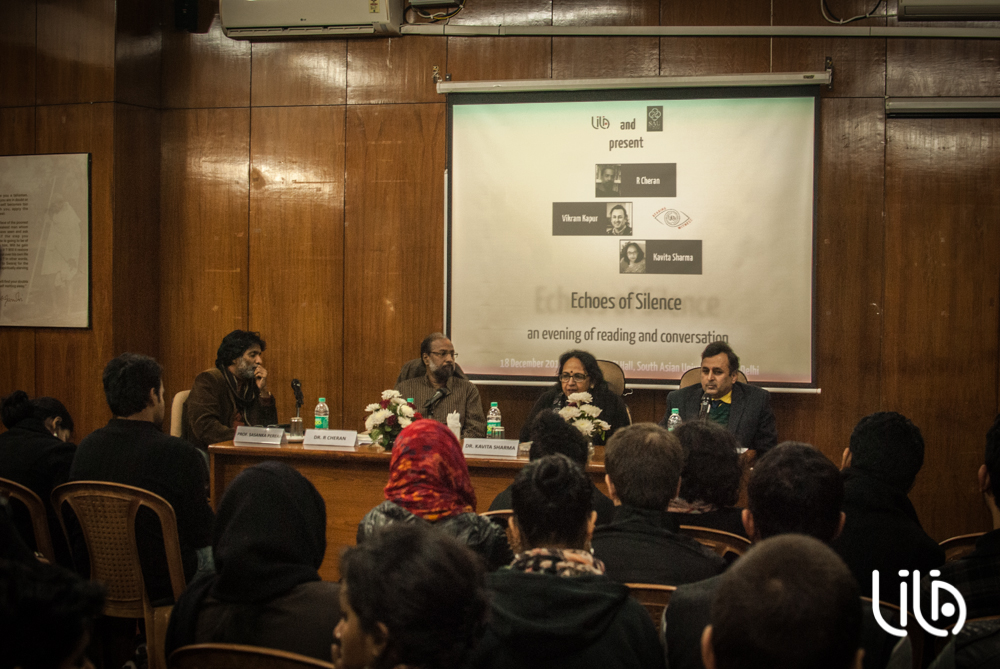 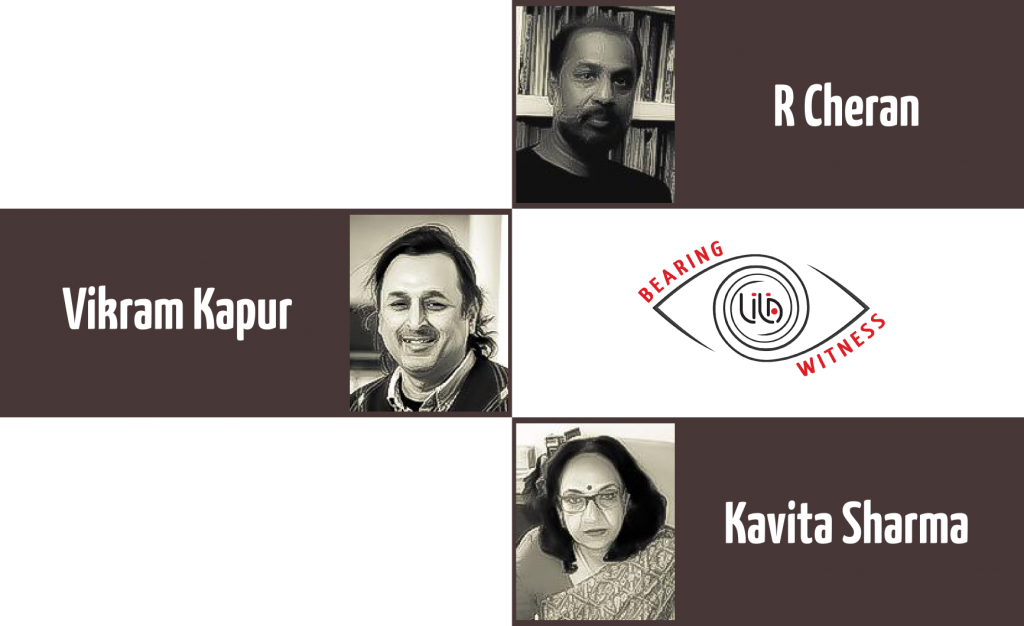 Echoes of Silence
an evening of reading and conversations

On Thursday 18 December, LILA Foundation & South Asian University organised an evening of reading and discussion with poet R Cheran and novelist Vikram Kapur, chaired by Kavita Sharma. Echoes of Silence was the second event hosted by LILA’ s cultural banner Bearing Witness. The multi-layered echoes of silence resonate long after the history of a period has been written; long after its facts have been disassembled and the actions of its principal actors argued over. With words, we seek to give each echo a shape and a form. With words, we seek to reclaim the echoes of the silences teeming all around us.

R Cheran is one of the most influential contemporary Tamil poets and is teaching at the Department of Sociology, University of Windsor, Ontario, Canada. A native of Jaffna, Northern Sri Lanka, he contributed to the creation of the Tamil newspaper Sarinihar in the early 1990s. His publications span the fields of multi-lingual poetry, literature, history, politics and culture.

Vikram Kapur is Associate Professor of English at Shiv Nadar University. He has a Ph.D in creative and critical writing from the University of East Anglia, UK. He taught journalism and creative writing and published two novels, Time is a Fire (Srishti, 2002) and The Wages of Life (Srishti, 2004). He also has numerous short stories and articles to his credit.

Kavita Sharma is the President of South Asian University, Delhi. She taught in Hindu College, Delhi University and became its Principal in 1998. In 2008, she took over as Director of India International Centre, New Delhi. Her publications span over higher education, language, immigration and identity, culture and women. A Fullbright Fellow, she was conferred the Indira Gandhi Sadbhavana Award in 2005. 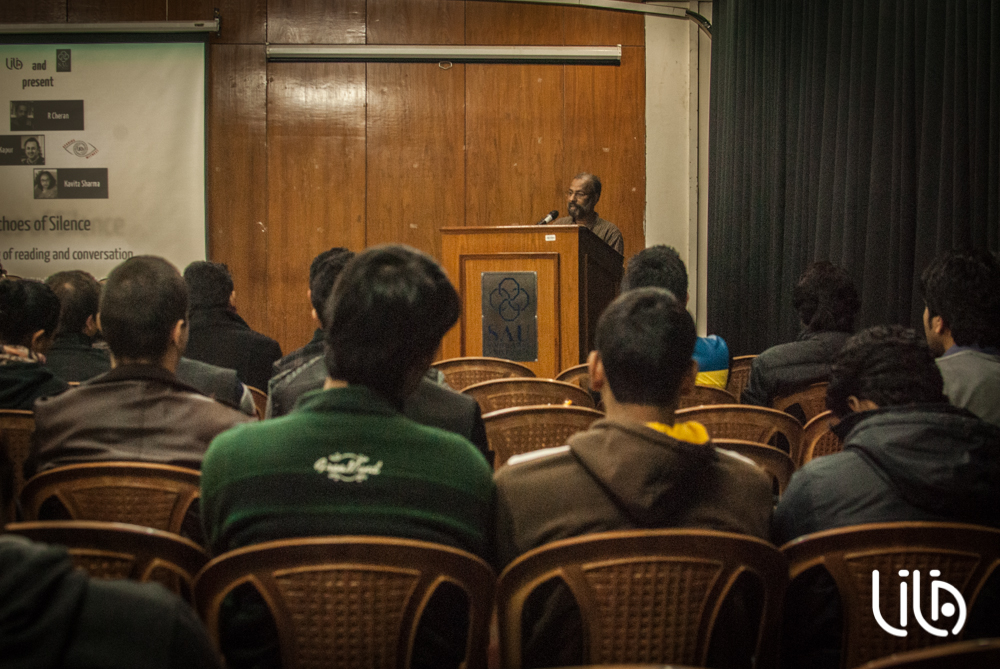 The poetry reading and conversation evening Echoes of Silence was held on Thursday 18 December at 6.30 pm at the FSI hall, South Asian University, Delhi. The programme sought to retrieve lost and painful memories to give shape to the echoes of silences teeming all around us. As the world continues to struggle to make sense of the extent of inhumanity at Peshawar, Echoes of Silence affirmed the role of poetry and art to bridge our polarised world. The evening brought together two eminent writers: Tamil poet in exile R Cheran (Sri Lanka) and English novelist Vikram Kapur (India). Both of them have been working closely with ethnic and religious confrontations in their respective spaces, using at times their creative works to articulate the hushed voices. The conversation that followed the readings was chaired by Kavita Sharma, President of the South Asian University. She opened the evening with one minute of silence for the victims of Peshawar.

Vikram Kapur, novelist and short story writer, whose fiction predominantly deals with the reverberations of communal violence in India, read from his short story ‘Accidental Lives’ in the context of the 1984 anti-Sikh riots. The story evoked the dynamics of intense personal relationships that change in the face of the intensifying impulses of religious extremism.

R Cheran started his reading with the poem ‘Children’, discussing the conditions of children in conflict zones. He also read out poems that had stemmed from his memory of the human rights violations in the last phase of the war between the Sri Lankan army and the LTTE. He offered a glimpse into his poetic journey, by connecting a string of poems in the context of some of the most engaging events in the history of South Asia.

Responding to the readings, Kavita Sharma, the Chair, underlined the sense of guilt that the readings evoked in her. She expressed a hope for the human kind to eventually overcome the barriers that divide, and usher in a sense of togetherness.

Sasanka Perera, Professor, School of Social Sciences, South Asian University, hosted an event attended by a packed audience. He spoke of the potential of cultural and literary expressions to refine ways of living and usher in a larger sense of community in these turbulent times. Rizio Yohannan Raj, Executive Director of LILA Foundation, underlined the transformative potential of resonant cultural initiatives to speak the unspoken, document and critique the dark side of history, allowing us not to repeat grave errors of the past. She dedicated the evening to the memory of the children of Peshawar, whose lives were flushed out so cruelly. 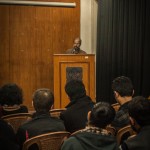 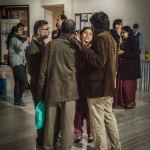 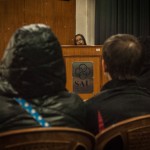 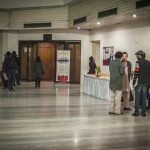 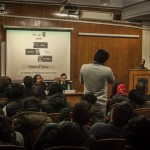 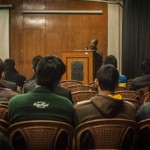 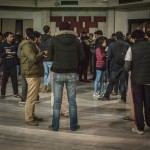 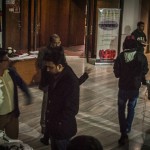 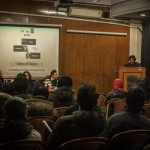 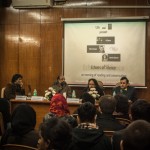 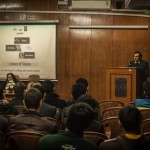 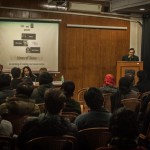 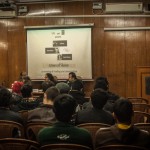 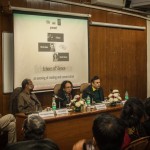 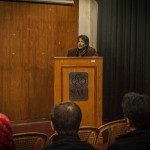