Having attended Pepita’s lecture on “Ritual as Continuity” as part of the LILA PRISM Lecture Series last year, the very mention of Kaapi LILA with her this year got my mind racing with fervent enthusiasm through the visions and memories of her lecture, and the much-needed and opportune possibility for extending this dialogue over through the format of Kaapi LILA where one gets to engage in a more intimate and intense one-on-one, shorn of formalities and barriers, and that too in a space like Nasheman. With this keen anticipation I looked forward to a gripping evening replete with awe and intrigue, and Oh, it did deliver!

A Space of Duality

Excavation. A slow, unhurried stroke of the brush. A layer of history unfolds. Sift through its dirt, dust and gravel. A gaze that yearns to see like a microscope does. What does it smell like? Mystique. If you listen close enough you’d hear the many stories bubbling beneath; rounded and rapturous chants of yore. The chasms widen upon further probing. A light begins to shine through. The skin tingles from its gentle warmth.

In due time the searing blaze of a hidden new world will seek its house. Inhabit this world. Let it engulf you.

How does one feel the vibrations of a place? Those that have been brewing over for a long time with every subsequent iteration of ‘man in nature’ and ‘man with nature’. Do you chance upon it or does it hit you unannounced? Is it like knocking on a door and expecting in return an affirmative gesture? What if there is no door? Where do you go looking then? How much time do you give yourself for this exercise, a day or two perhaps, or possibly a week? Or if you don’t have time, can you hope to feel it with a speedy furtive glance, much like the one that you allow yourself when busy navigating the labyrinth of everyday mundaneness? 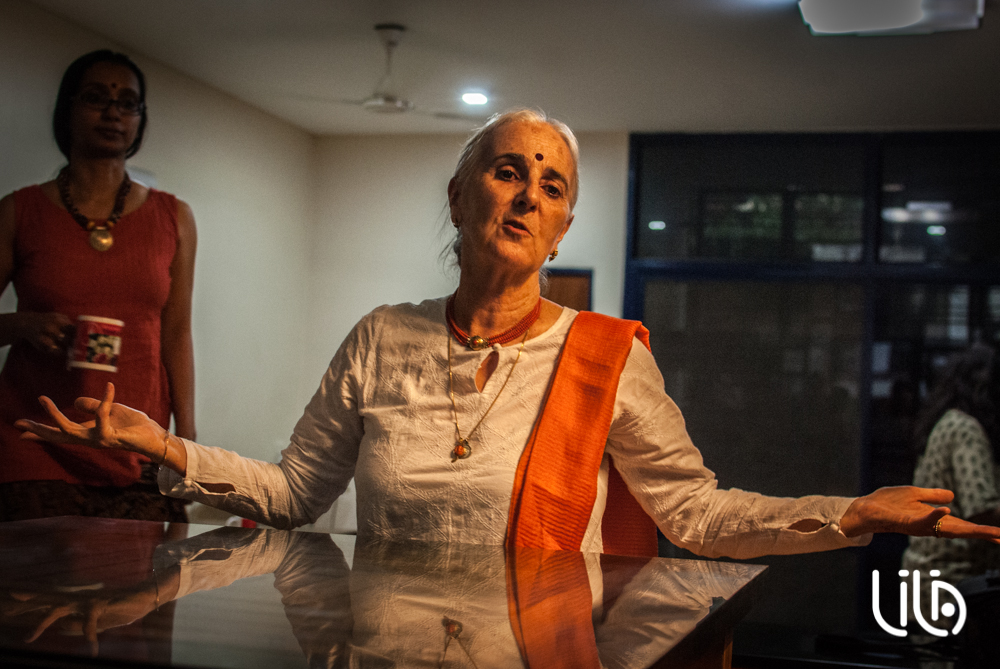 Pepita’s engagement with land seems to suggest otherwise. In her case the continued discourse of the ‘outsider’, the ‘other’ and the ‘self’ is situated within the Theyyam discourse where one sees a blurring of the ‘outsider’, the ‘other’ and the ‘self’. The notion of spatiality that this juxtaposition connotes is one that is simultaneously ‘inside’ and ‘outside’. This liminality finds its expression in her commitment to the land from ‘being there’, and ‘being one’ with its people and their place. Thus what may appear to an outsider as distant and exotic will assume dimensions of the ordinary. This idea is driven home further when Pepita reveals that Theyyam has an impact on every iota of the lives of the people of Malabar. With this I also get a sense of the empathy in her approach that is extended to the collective whole of the land, as a repository of a long history of traditions and customs and the people, as its custodians. When she finds herself with the onerous task of staying true to the collective whole, she notes that even as a photographer she never forgets that it is the theivam and not the theyyakaaran in front of her which means she cannot take the same kind of liberty as she would otherwise.

The custodians are nothing short of master-craftsmen, reservoirs of a vast knowledge and possessing an array of skills under their belt. It is fascinating how all of this is so deeply rooted in the material realm, and yet through the vehicle of the body of the theyyakaaran attains another-worldly consonance in the spiritual realm. In a way, using very finite media and tangible sources the theyyakaaran is able to express that which is infinite. I find it curious how the form of theyyam goes beyond the narrow confines of the trope of religious ritual.

First, that it marks the dissolution of barriers between different realms namely the bodily, the psychic and the spiritual, thereby making it somehow more accessible. In this it becomes less esoteric and more tangible. This in fact extends into the structure of the form itself where, as Pepita describes, the theyyakaaran carries the theivam. Here I sense the breakdown of the ‘divine’ and the ‘other’. That there is a possibility of a seamless interplay between the two is wondrous.  I come from a background where ritual is upheld in its privileged higher ground and it is so refreshing to learn that in ritual there can be such a palpable sense of liveliness and animation and an active sense of participation, where the devotee seeks solace from the deity by engaging in actual conversation and together finding resolution and inner peace. That it has a very definite, all-pervasive life-force running through its veins makes it easier, and doesn’t require a stretch of imagination to comprehend, and the notion of ‘presence’ in ‘space’ being a central theme further cements the stand that it takes in the vast landscape of faith and ritual in that it is very interested in manifestation of the divine form in all its fullness. Also the underlying sense of quirk to the ritual came through just from listening to Pepita recounting all the various anecdotes of wry humour and satire she witnessed. The element of lila is omnipresent in the space of Theyyam. Pepita says, “Nothing is what it seems to be. Nothing is static. The only definitive statement that you can make about Theyyam is that there is nothing definite.” There seems to be an effortless flexibility about the form that allows it to slip into the most specific context and still find its own particular truth. A theivam may be invoked through a particular thottam in one shrine, while in another shrine with a different narrative, the thottam may have its own set of particularities and subtle differences, and all this the theyyakaaran knows! 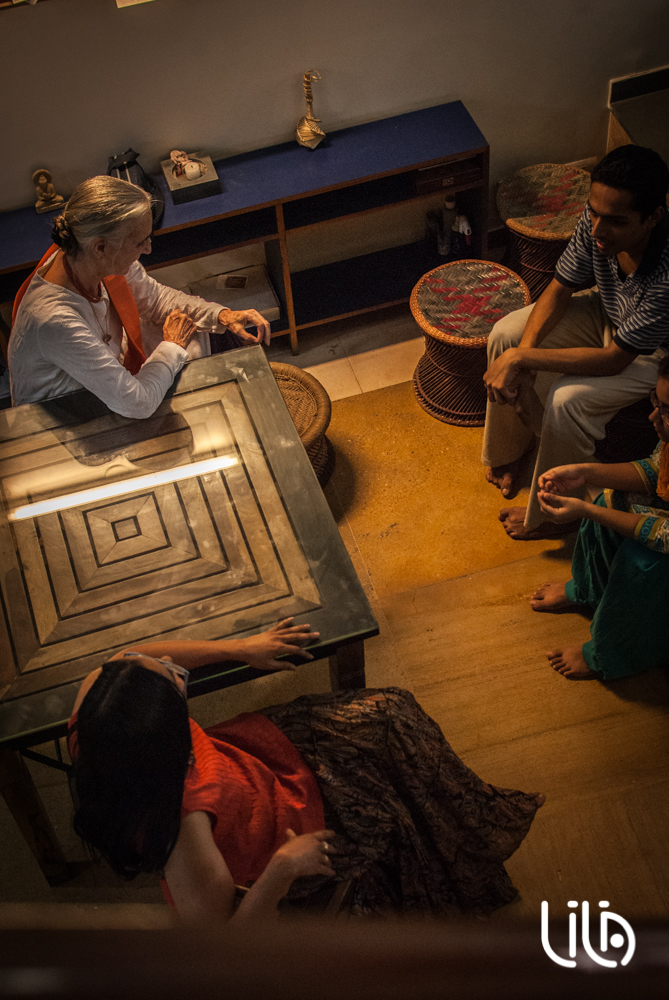 Secondly, Theyyam being a subversion of the caste politics and social order of the land and its people makes it such a juicy subject to study. It in fact even allows me to the possibility of alternatively interpreting the ritual as a language to carry the voice of dissent of the oppressed much like the theyyakaaran carrying the theivam. Perhaps the 950 and odd theivams in the repertoire of Theyyam are all narratives woven around incidences of various injustices doled out to the voiceless, and that they have found the means to express the anguish, anger and pain through the many fierce and ferocious Theyyams could be truly empowering.

In today’s capitalist economy where everything is marketable and profit-driven, these ritualistic traditions are also falling prey to its ever widening trap. And this has a direct and immediate implication on the spatiality of the ritual, how it situates itself within its land and society.  When asked about change, Pepita sadly notes that while on the one hand the knowledge that was once passed on to the theyyakaaran has itself diluted, there is a very disturbing shift towards a lack of reverence for the form, its tenets and ultimately the theivam itself. The notion of a ‘sacred space’ is being trampled over by sudden influx to make way for modern accoutrements that clash with the spirit and aesthetics of the traditional form. This is a case in example of the sure state of conflict that the land, people and place are caught in, between tradition and sudden onslaught of modernity.

Change is inevitable and evolution is necessary, but so is preservation of the spirit. To save it from the stranglehold of crass, distasteful and irreverent offshoots of modernity, the efforts of individuals like Pepita are admirable. Theirs is an exercise that is giving voice to forms like Theyyam by speaking for it and championing its cause in a bid to protect the essence that lies at its centre, much like the theyyakaaran being the vehicle for the theivam, an embodiment of harmony of the land, people and place.

As we proceeded to unwind over coffee and refreshments, I began to mull over all that was said, left unsaid and subtly suggested, the immense complexity dawned on me. Pepita somehow made it all sound so simple in the way she seamlessly wove narratives into one another, tying them together into a tale of folklore. But there was so much weight and intensity to everything that she said that it gives so much more scope to expand on, and I attribute this largely to the Kaapi LILA platform that allowed for this freewheeling conversation to make many interesting turns and thus chance upon several unexpected surprises that were ultimately rewarding. This experience has left me with an aching desire to witness the Theyyam ritual and continue this process of exploration & reflection. I hope to do so very soon!

Pepita Seth is a photographer and writer. She has been living in Kerala and researching its cultures and traditions for over three decades More details here. 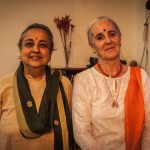 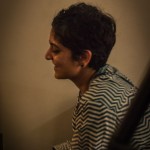