Look Into My Eyes 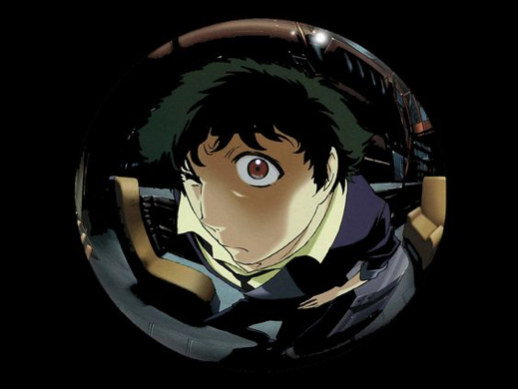 7th June, 2016 Spike Spiegel had a fake eye. I assume it was crystal. I even go as far as to deduce that it was transparent, but I wouldn’t dare to suggest that it was fake. “Look at my eyes Faye. One of them is a fake cause I lost it in an accident.” It has been a year since I finished watching the series that many insist is the gateway to anime. The end credits insist that we will all carry that weight and so I did, but presently, I feel surprisingly light. The burden was already there; fears, phobias, anxieties and the heaviest of all: regret. Shinchiro Watanabe’s ‘Cowboy Bebop’ only allowed us to share it with its haunted characters. The past accumulates its weight even as I attempt to exorcise my mind. Some of these ghosts are buried too deep, in the darkest crevices. Others are new to the block. Tenants that I can’t seem to evict. “Since then I am seeing the past in one eye and the present in the other.” But they have found a home in the crystal eye. Harnessed the eeriness in the jerky motions of a porcelain doll’s eyeball. It ceases to be a window to look out or to look in to. It is now a daunting screen. A constant playback function. NOW SHOWING: Mistakes, Regret and Futile overthinking, which leads to crippling anxiety. A gripping movie title, extremely relatable, but nevertheless: ridiculously overplayed. “So I thought I could see patches of reality, never the whole picture.” My other eye, in it its noble venture to present reality, is painfully distracted. My vision is inevitably blurred. An equalizing cataract, which plagues the old and young alike. Reality too, is often overplayed. Worst of all it is recorded. The ultimate poser is so well conserved but never really preserved. I allow it to be distorted, almost painfully mangled and presented over and over again as a disturbing memory, conducing seizure like cringing. I do not exaggerate. Look into your own crystal eye and see spots of color arise and experience losing the utopian ‘whole picture.’ A myth as legendary as El Dorado. One can hope that at least it entails adventures as legendry as the search for gold. For it won’t help to gouge the past out. Your vision will remain impaired. The colorful dots might fade but the voids won’t cease to exist. ‘Don’t tell me things like that. You never tell me things like that.” Ha! Now you too, will carry that weight. 20th June, 2015 It has been seven days since I saw the last episode of the acclaimed anime Cowboy Bebop, and as it so rightly predicted at the end of its credits, I will carry that weight (yes, I watched the credits, grasping on to the bleak hope of a happily ever after). Rather than bringing closure, the finale left me feeling burdened and unable to cope with the end, with no way of tying up lose strings that the plot and its characters left behind. This aspect of the series though, thrives in the very essence of the show that indicates that the burdens of the past never really leave us, not until the very end, perhaps not even after. The past is the main motif in the series, lurking as heavily in the viewers mind as those of the bounty hunters of the Bebop. The series could be analyzed as a concluding epilogue to the backstories of the characters. While the episodic normalcy of the adventures of the ever-failing bounty hunters present a wonderful plotline of its own, viewers are irrevocably hooked due to the omnipresence of a dark past. It is perhaps due to this reason most viewers have stated that the fifth episode, “Ballad of Fallen Angels” is the session that really hooked them on; the session where we get to see an element of Spike’s dangerous past revived. It is Spike’s artificial eye that provides us with the metaphor that exhibits the major theme of the show. Our past makes us what we are, and our future has the potential to make us something more, but there isn’t really no escaping the past. Even the elusive and enticing Faye Valentine has to eventually deal with her past, despite having been cryogenically frozen for the past half-century and having lost her memory, only to recover them and realize that she has nothing to go back to. The Bebop gathers an array of strange, troubled and even broken characters whose lives go on, despite the intervention of what lies in the time gone. All of us carry that weight, regardless of our individual experiences; compelling us to reserve an eye solely to view the past.
Next article: A Roomful of Silence
Chahat Rana is currently pursuing a liberal arts degree in English literature, the only thing Chahat has done is to read and write. So she writes:the good, the bad and especially the ugly. She believes that words weave messages and hence good expression is not just a literary necessity, but a responsibility.

A Roomful of Silence

The Decadence of Preservation